“As a former dean of Southwestern, I know that Southwestern has many outstanding scholars on the faculty. This gift is meant to support and bring attention to these scholars. I am delighted that my aunt’s foundation is in a position to make this gift and contribute to Southwestern’s strong trajectory of scholarship.”

“I am honored to work with Dean Garth and the Kenneth & Harle Montgomery Foundation to recognize and reward these impressive scholars. Each is building and sharing knowledge and ideas that will impact their areas of expertise and help improve the law and our society.” 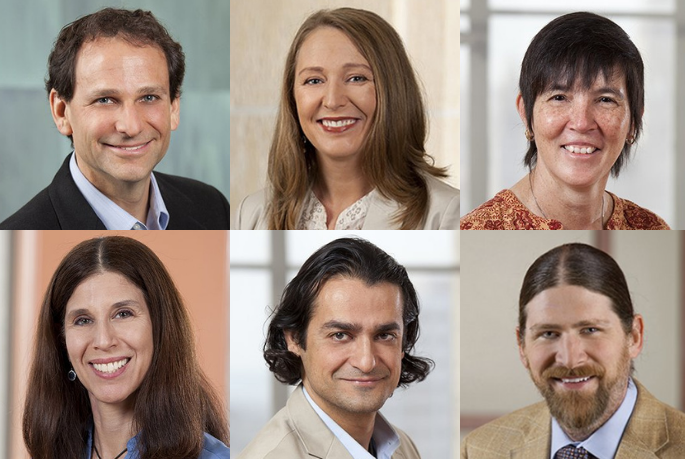 The inaugural Kenneth & Harle Montgomery Foundation Distinguished Scholar is Professor Michael Dorff. Professor Dorff is a keen observer of corporate law whose past scholarship has appeared in publications including the Harvard Business Law Review, the Delaware Journal of Corporate Law, the Journal of Corporation Law, Southern California Law Review, and Indiana Law Journal. In 2014, the University of California Press published his book, Indispensable and Other Myths: Why the CEO Pay Experiment Failed and How to Fix It. He has also contributed chapters to books published by the University of Chicago Press and Cambridge University Press and written op-eds published by The Atlantic, Politico, the New York Times, and the L.A. Times. He has been a featured speaker at national and international conferences on executive pay, venture capital financing, and other corporate law topics. This award will enable Professor Dorff to continue working on his upcoming book on public benefit corporations, an area in which he is one of the country's few authorities.

Professor Dorff is a former Chair of the Association of American Law School's Section on Scholarship, is an Honorary Fellow of the Hanken Centre for Accounting, Finance, and Governance, and has served as an expert witness in various matters involving corporate law and fiduciary duty. He holds the Michael & Jessica Downer Endowed Chair and co-directs Southwestern's Technology Law & Entrepreneurship Program.

Caldwell has served as a Ford Foundation Fellow, a Fulbright Garcia Robles Fellow, and a Soros Justice Media Fellow. She recently served as Chair of the Legal Scholars Committee of the American Psychology-Law Association and is a peer review for various publishers, including the Journal of Empirical Legal Studies, Oxford University Press, University of California Press, Oxford University Press, and the Criminology & Public Policy Review. She is an expert in crimmigration, immigration policy, and youth parole issues and is a sought-after speaker about matters related to immigration and deportation.

Professor Hart has served as an invited speaker at conferences on contracts, international contracts, race and social inequity, and critical studies. She is currently organizing a symposium with the Southwestern Law Review on Professor Meera Deo's ground-breaking book, Unequal Profession. She is a past chair of both the AALS Section on Contracts and the AALS Section on Sexual Orientation and Gender Identity Issues. She is a long-time member of the ClassCrits organizing committee.

Professor Hila Keren is Southwestern's Associate Dean for Research and the Paul E. Treusch Professor of Law. Dean Keren's primary areas of scholarship are contract law, feminist jurisprudence, critical race theory, and the emerging field of law and emotions. Her scholarship has been published in the UC Irvine Law Review, California Law Review, Florida Law Review, Florida State Law Review, Minnesota Law Review, Wake Forest Law Review, Columbia Journal of Gender & the Law, BYU Law Review, Michigan Journal of Race & the Law, and Harvard Law Review Forum. In 2005, she published her first book, Contract Law from a Feminist Perspective (in Hebrew). She has also produced many book chapters and blog essays. She is a frequent invited presenter on contracts and emotions, antiracism, and gender issues. Her op-eds have appeared in USA Today, Bloomberg Law, and the L.A. Times. She is currently working on a law review article on emotions and the law, examining what she has coined "Market Humiliation."

She has received the Birk Foundation Outstanding Young Research Award, the Polonsky Prize for Creativity and Originality in the Humanistic Disciplines, Hebrew University of Jerusalem's Golda Meir Fellowship, and a post-doctoral scholarship to conduct research UC Berkeley's Center for the Study of Law and Society.

Professor Tehranian has been named one of the top music lawyers by Billboard Magazine and one of Variety's top 50 entertainment lawyers in the world. He is an in-demand speaker and commentator on entertainment law, intellectual property, racial identity, and transracialism.

Professor Wood has given conference presentations about Indigenous land tenure and property rights in California, Indian gaming and its legal history, and sovereignty immunity, tax, and other jurisdictional issues.  He also served as Editor-in-Chief of Federal Indian Law, the newsletter of the Federal Bar Association's Indian Law Section.

These generous awards from the Kenneth & Harle Montgomery Foundation provide professors with needed resources to continue producing high-quality scholarship that will impact the legal profession and the world.

The Kenneth & Harle Montgomery Foundation was established in 1993 and supports numerous educational and other charitable activities.

Southwestern Law School has been at the forefront of legal education for 110 years. Founded in 1911, Southwestern Law School is the only ABA-approved law school offering four J.D. courses of study differing in scheduling and instructional approach, including traditional full- and part-time programs. Its two-year accelerated program (SCALE) is the best attended and longest-running program of its kind. Home to the Biederman Entertainment and Media Law Institute, Southwestern is recognized as one of the country's top ten entertainment law schools. Its urban campus includes the landmark art deco Bullocks Wilshire building and platinum LEED-certified student residences. Southwestern graduates are well-rounded, entrepreneurial, community-minded, and prepared for practice. Take the virtual tour at www.SWLaw.edu.