Announcing the Winners of the Mayor Tom Bradley Art Competition

Southwestern is pleased to announce the winners of the Mayor Tom Bradley Legacy Visual Art Competition! In blind judging, six judges (including Lorraine Bradley and professors from CSUN and LAVC) have selected the following top three entries out of nearly two-dozen submissions: "This project is dedicated to Mayor Tom Bradley who had a great influence on the development of America. Thomas J. "Tom" Bradley (December 29, 1917- September 29, 1998) was the 38th Mayor of Los Angeles, serving from 1973 to 1993. He has been the only African-American mayor of Los Angeles, and his 20 years in office mark the longest tenure by any mayor in the city's history.

To create my painting, I used the public service legacy of the Tom Bradley Era in the City of Los Angeles, which includes: 1) Promoting the expansion of the Los Angeles International Airport and the Los Angeles Harbor- now leaders in the world for cargo and commerce. 2) Driving force in developing the Los Angeles Metro Rail Project and Los Angeles county's light rail system, envisioned at the time as a 150-mile rapid transit program when completed.

On the right side of the painting is painted the portrait of Mayor Tom Bradley. By painting in the background, portrait, sky, and plane, I wanted to show the desire for freedom and development. Presence of subway tunnel symbolizes the pursuit of light."
- Ashkhen Avetisyan "A tribute to an incredible and very inspirational man who helped, supported, and believed in minorities, in children, and in the people who lived in the wide Los Angeles area. His accomplishment creating LA's Best is depicted in the poster with the colorful children going to their after-school program to get help for a brighter future. It is an honor to celebrate the work of the first African-American Mayor whose power was used for improving and giving support to many in need." - Nathalie Ferriz 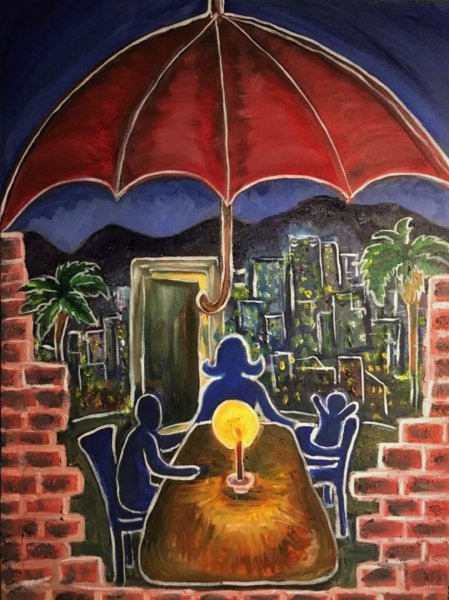 "I am very much inspired by the Low-Income Housing program that Mayor Tom Bradley put into place. My goal was to create an image that invites the viewer to get a sense of safety and security. I chose to depict a family at their dinner table, showing a place where they can break bread together surrounded by candlelight, representing hope and safety within the city. The umbrella is symbolic of the Low-Income housing project sheltering the family from the outside streets of LA. I feel this program is significant to Los Angeles and is something that should be honored and displayed proudly. Every family deserves to feel safe and secure, and I feel that I did a successful job capturing the importance of that."
- Tiffany Alexandria

Please note this competition is closed.
The following is provided for reference.

The Mayor Tom Bradley Legacy Visual Art Competition is being conducted as part of the Tom Bradley Centennial Year Project to honor the memory of Los Angeles’ longest-serving (1973-1993) and first African American mayor who would have turned 100 in December 2017. Mayor Bradley’s historic leadership continues to have an unprecedented impact on the City of Los Angeles more than two decades after he completed five terms as mayor and more than 50 years in public service.

With the goal of exposing a new generation to the amazing story and inspiration of Mayor Bradley, the competition is designed to generate exciting student-produced artwork reflecting the Mayor’s legacy and the importance of civic engagement. Finalists’ art will be displayed at the historic Bullocks Wilshire landmark and other civic and cultural venues of Los Angeles.

The competition is being coordinated by Southwestern Law School1 in collaboration with the Tom and Ethel Bradley Foundation and the Los Angeles Valley College Department of Art, in addition to other educational partners, such as the CSUN Department of Art.

1 Mayor Bradley earned his law degree at Southwestern in 1956.

“A Life of Purpose: Celebrating the Life and Legacy of Mayor Tom Bradley”

Artwork should reflect one or more aspects of Mayor Tom Bradley’s contributions to the development of Los Angeles; his trailblazing legacy of perseverance, vision, coalition building, civility, innovation and inspiration; and the need for young people to follow Tom Bradley’s example by making civic engagement an important part of their lives. Artwork could also be based on the historic times and issues in Los Angeles during Mayor Bradley's tenure.

Each participant must be enrolled as a student between January 2017 and January 2018 in a high school, community college, college or university within the Greater Los Angeles area.

Participants are encouraged to register/complete the entry form as early as possible in order to receive information regarding competition updates and related news, additional resources, helpful hints from members of the judging panel, and possible additional award or recognition opportunities. Art may be uploaded any time up to the submission deadline.

Artwork may be realistic or abstract. Any (or a combination) of the following media or techniques may be used:

Note: Materials that are extremely delicate or easily breakable, such as glass, are discouraged. No video/film submissions will be accepted for this competition.

The panel of judges will include prominent local artists, educators and civic leaders who will review entries based on the following criteria:

The Bradley Art Competition will award the following cash prizes:

At the judges’ discretion, additional entries may earn Honorable Mention recognition. All finalists will be notified by April 1, 2018. Up to 20 Finalist entries will be selected for possible display at Southwestern’s historic Bullocks Wilshire landmark on Wilshire Boulevard and other venues. Directions will be provided for preparing and delivering winning artwork to Southwestern Law School or other local venues for public display beginning Spring 2018.

All artwork must be created entirely by the individual entrant and must be original in design, concept and execution. Any artwork that depicts copyrighted images or infringes on the intellectual property of another party will be disqualified. By participating in the competition, each entrant grants Southwestern Law School, competition partners, display venues and their affiliates non-exclusive perpetual license to reproduce images of the artwork in their respective websites, print materials and displays, and grants permission to use his/her name, likeness, and artwork for publicity purposes without payment of additional consideration.

Complete rules and entry form for the Tom Bradley Visual Art Competition are available here.
Questions may be directed to bradleyartcompetition[at]swlaw.edu

For more information about Tom Bradley: