Announcing the Winners of the Mayor Tom Bradley Art Competition!

Southwestern is pleased to announce the winners of the Mayor Tom Bradley Legacy Visual Art Competition! In blind judging, six judges (including Lorraine Bradley and professors from CSUN and LAVC) have selected the following top three entries out of nearly two-dozen submissions: "This project is dedicated to Mayor Tom Bradley who had a great influence on the development of America. Thomas J. "Tom" Bradley (December 29, 1917- September 29, 1998) was the 38th Mayor of Los Angeles, serving from 1973 to 1993. He has been the only African-American mayor of Los Angeles, and his 20 years in office mark the longest tenure by any mayor in the city's history.

To create my painting, I used the public service legacy of the Tom Bradley Era in the City of Los Angeles, which includes:

On the right side of the painting is painted the portrait of Mayor Tom Bradley. By painting in the background, portrait, sky, and plane, I wanted to show the desire for freedom and development. Presence of subway tunnel symbolizes the pursuit of light." 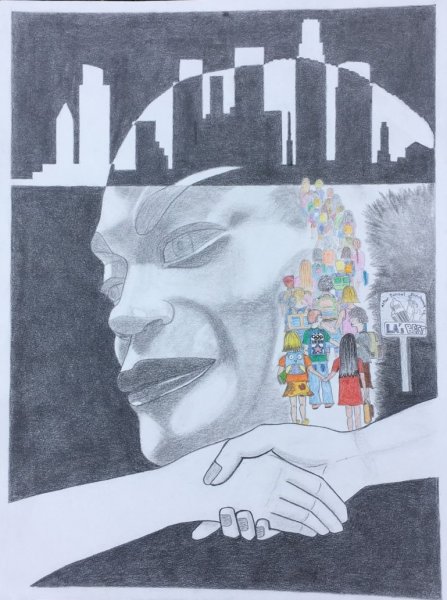 "A tribute to an incredible and very inspirational man who helped, supported, and believed in minorities, in children, and in the people who lived in the wide Los Angeles area. His accomplishment creating LA's Best is depicted in the poster with the colorful children going to their after-school program to get help for a brighter future. It is an honor to celebrate the work of the first African-American Mayor whose power was used for improving and giving support to many in need." "I am very much inspired by the Low-Income Housing program that Mayor Tom Bradley put into place. My goal was to create an image that invites the viewer to get a sense of safety and security. I chose to depict a family at their dinner table, showing a place where they can break bread together surrounded by candlelight, representing hope and safety within the city. The umbrella is symbolic of the Low-Income housing project sheltering the family from the outside streets of LA. I feel this program is significant to Los Angeles and is something that should be honored and displayed proudly. Every family deserves to feel safe and secure, and I feel that I did a successful job capturing the importance of that."

Congratulations to the winners, and thank you to all the artists who submitted wonderful pieces of art that reflect the legacy of Los Angeles’ longest-serving (1973-1993) and first African-American mayor!

The winners of the Mayor Tom Bradley Legacy Visual Art Competition were hosted at Southwestern for a lunch reception on the Dean's Terrace. They were awarded their prizes in person by Lorraine Bradley, daughter of Mayor Tom Bradley '56, and Dean Susan Westerberg Prager. Thank you to Lorraine Bradley and Charmaine Jefferson of the Tom & Ethel Bradley Foundation for joining us and sharing their stories of Tom Bradley and his legacy. What an honor!